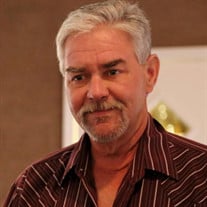 “…and as it is appointed unto men once to die, but after this the judgement…” Hebrews 9:27 A loving husband, father, grandfather, son, brother, uncle, and friend. A native and resident of Holden, Wade earned his wings November 16, 2021 at the age of 60 with his beloved wife by his side. He was a retired Baton Rouge Firefighter with 32 years of service, an avid fisherman, hunter, and farmer. He is survived by his loving wife of 35 years, Wendy Bertrand Gill; sons and daughters-in-law, Matthew and Rachel Gill, and Andrew and Rebecca Gill; granddaughters, Mallory and Lara Gill and a future grandson expected in June; brother Barry Gill; sister, Belinda Pizzolato (Brent); father-in-law, Gene Bertrand; sisters and brothers-in-law, Carol (Joe) Bates, Gary (Missy) Bertrand, James (Maria) Bertrand, David (Carol) Bertrand, and Florence Bertrand Burke; godson, Chase Pierce; along with numerous aunts, uncles, nieces, nephews, cousins, and friends. Preceded in death by his parents Charles and Delores Gill; paternal grandparents Charlie and Irene Gill; maternal grandparents R.T. and Frances Sullivan; mother-in-law Bobbie Jo Bertand; brothers-in-law Mark Bertrand and Jimmy Mott, and several aunts and uncles. Relatives and friends of the family are invited to attend a visitation from the Chapel of Brandon G. Thompson Funeral Home, 12012 Hwy 190 West, Hammond, LA. on Friday, November 19, 2021 from 5:00 p.m. until 9:00 p.m. Visitation will resume Saturday, November 20, 2021 at 9:00 a.m. until the start of the Funeral Service at 11:00 a.m. Rev. Carl Sullivan and Fr. Jamin David will officiate with the interment to follow in Bankston Cemetery in Holden. Pallbearers are Barry Gill, Chase Pierce, Alan Gill, Keith Street, Tim Hill, and Todd Dours. Honorary pallbearers are Ricky Oliphant, Jim Gravois, Sam Ricca, Tommy Mizell, and Rudy Robinson. Flag Folders are J.W. Stewart and Jeremy Cooper. In lieu of flowers, memorial donations may be made to St. Margaret Catholic Church Building Fund; P.O. Box 100, Albany, LA 70711 or to the charity of your choice.

The family of Aubrey 'Wade' Gill created this Life Tributes page to make it easy to share your memories.

“…and as it is appointed unto men once to die, but after this...

Send flowers to the Gill family.