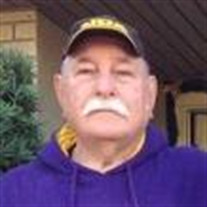 Anthony Calvin Hooper, known to his family and friends as Calvin and by his Bellsouth/AT&T coworkers as A.C., left this world peacefully September 10, 2021, in Baton Rouge, LA, with family by his side. The Hodgkin’s Lymphoma he was diagnosed with in July quickly ravished his stubborn, strong body. He never missed a minute of those last months to tell his wife, Linda (Parr) Hooper, and his children, Dr. Tara (Hooper) Ryan, Jason Hooper, and Marcy Hooper how much he loved them and will love them forever. Born in New Orleans on August 20, 1946, Calvin was wed to Linda for nearly 53 years of marriage, although they both claim that it was 132 years of a crazy life together. He served in the US Marine Corps during the Vietnam War. Things that Calvin will forever be remembered for include his love of weapons and books, his strong opinions (which he was very vocal about), his ability to build things that will last long after we are all gone, his strong sense of loyalty, and his dark sense of humor and trivia knowledge that he bestowed on all of his children. If you asked Calvin how he was doing at any moment, his reply was always, “Better and better.” Calvin is survived by his wife, Linda, his three children, Tara, Jason, and Marcy, son-in-law, Jeffrey Ryan, daughter-in-law, LuAnn (Hirschman) Hooper, 13 grandchildren, and two heartbroken brown dogs. He is also survived by sisters Lorraine (Hooper) Pell and Sharon (Hooper) Troxclair, and aunt Carol (Ernst) Wehmeyer. He is preceded in the afterlife by his grandparents, Leslie and Margaret (Messina) Ernst, his parents, Arnold Calvin and Rosemary (Herrmann) Hooper, and his brother, Rickey Hooper. The family sincerely thanks North Oaks Hospital, Clarity Hospice, Pontchartrain Cancer Center, and the many friends who have helped us through this time. In lieu of flowers, donations may be made to Semper Fi & America’s Fund at semperfifund.org. To quote his favorite song by the Eagles, “It’s your world now. My race is run. I’m moving on. Like the setting sun. No sad goodbyes. No tears allowed. You’ll be alright. It’s your world now.” Visitation is from 9 am to 10am for family and 10 am to 12 pm for friends on Saturday, September 18, 2021, at Brandon G. Thompson Funeral Home, 12012 Hwy 190 Hammond, LA 70401 with service to immediately follow led by Pastor Russell Hinson. Masks are required, please.

Anthony Calvin Hooper, known to his family and friends as Calvin and by his Bellsouth/AT&T coworkers as A.C., left this world peacefully September 10, 2021, in Baton Rouge, LA, with family by his side. The Hodgkin&#8217;s Lymphoma he was diagnosed... View Obituary & Service Information

The family of Anthony 'Calvin' Hooper created this Life Tributes page to make it easy to share your memories.

Anthony Calvin Hooper, known to his family and friends as Calvin...

Send flowers to the Hooper family.